Cheniere Energy, a liquefied natural gas producer, is asking for 18 months to upgrade turbines that failed pollution tests, according to Reuters. A total of 21 of the company's 44 facilities exceeded new safety limits.

They want to resolve the problem as soon as possible

The natural gas liquefaction turbines exceeded limits measuring the presence of formaldehyde, according to National Emission Standards for Hazardous Air Pollutants (NESHAP) testing data. In addition to limiting the amount of formaldehyde emitted into the air, NESHAP also limits benzene, and according to the Environmental Protection Agency (EPA), Cheniere is one of only two gas exporters subject to the rules. At a time of high demand, the company wants to eliminate the problem as soon as possible, since the heating season is already in full swing. According to company spokesman Eben Burnham-Snyder, these repairs will not have a significant impact on finances and operations. However, he did not provide a cost estimate for the turbine upgrades.

The solution is obvious, but it will take some time

Cheniere has proposed a two-phase approach as a measure against environmental damage: the first phase would take 90 days and would involve retesting after replacing some combustion and metering components of the turbine. The second phase would require a longer engineering analysis process, after which the turbines could be replaced with newer technology. Final resolution of the problem is expected in April 2024.

Gas production is expected to increase

In the meantime, Cheniere will take steps to reduce emissions. Total gas production is expected to be higher than last year as the expansion at Sabine Pass slightly offsets the current outages for maintenance. The main plant in Corpus Christi, Texas, has passed the regulation and Cheniere further plans to expand its plants in both Texas and Louisiana. For the third quarter, sales were $8.85 billion, more than double the previous year figure, driven by much higher product volumes and prices. Among U.S. companies, Cheniere was the first to begin exporting natural gas and is currently a Fortune 500 company.

Over the past year, the value of the company's shares has increased by 59.73 percent. [*] At the close of Friday's trading day, it was just under $163 per share and the company's market capitalization was more than $40 billion. 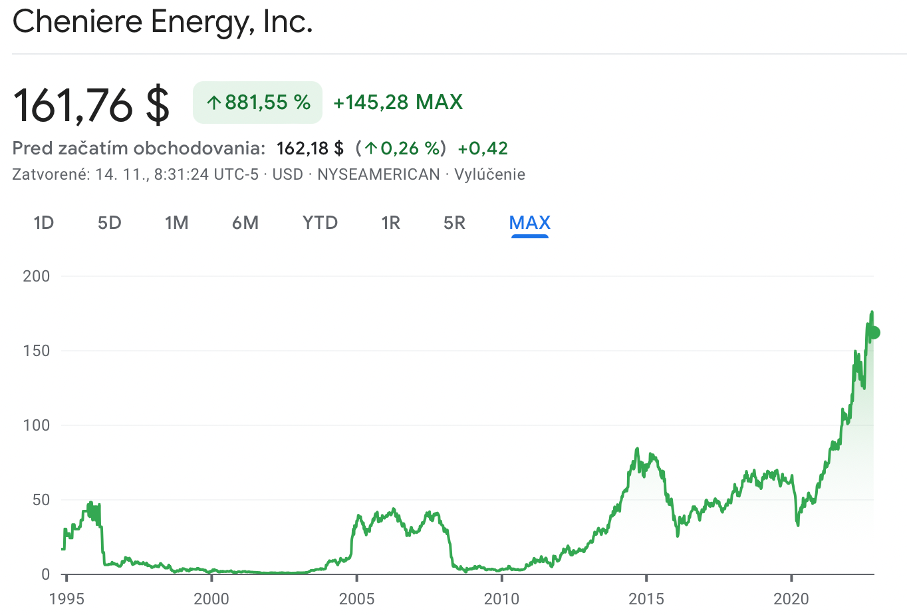 Slowdown in gas exports to Europe

The company had once applied to US authorities for an exemption from rules that limited emissions of possible carcinogens, but the request was denied. Cheniere now needs time to repair its facilities, which will significantly slow US gas exports to Europe. If demand remains high and problems with supplies from Russia continue to persist, Cheniere's shares may not experience a significant correction despite the aforementioned problem. On the contrary, in the long term and with the prospect of eliminating the emissions problem, they have sufficient potential for further growth. [1]

[*] Past performance is no guarantee of future results

[1] Forward-looking statements are based on assumptions and current expectations, which may be inaccurate, or on the current economic environment, which may change. Such statements are not guarantees of future performance. They involve risks and other uncertainties that are difficult to predict. Results may differ materially from those expressed or implied by any forward-looking statements.