Alibaba's shares were not helped by Xi Jinping's speech. They continue to lose value

The Chinese market is struggling with numerous problems. A declining property market, the long-term oppressed position of technology companies, worsening relations with both the US and Europe as a result of supporting Russia in the war in Ukraine. All of this has been pushing down the shares of Chinese technology companies for some time, led by the giant Alibaba. In fact, the company's shares have been in a correction on the New York Stock Exchange since October 2020, according to Investing.com.

Shares of technology firms in China, including Alibaba, reacted positively to comments made during a major speech by President Xi Jinping a few days ago, which boosted the sector in the country and brought a certain amount of relief and hope to investors there. Xi Jinping opened the National Congress of the Communist Party of China, which is held every five years, where the country's top leaders meet and set a plan for China's future. This time, the discussions focused particularly on the importance of strengthening the country's technological position.

Shares of the companies responded by rising

This is a welcome breath of fresh air after concerns that have persisted there for some time due to the economic slowdown and the Communist Party's fight against the country's technology sector. Alibaba shares responded immediately after the speech by rising more than 5 percent. Shares of other Chinese technology firms such as JD.com, NIO and Tencent also rose along with Alibaba.* However, the rise did not last long.

Alibaba shares in the red

Alibaba shares were trading below $64 per share on the NYSE late last week. They had written off more than 3 percent of their value before the opening of trading on Monday.* Negative sentiment in the markets thus continues to push them down. Back in October 2020, investors could still buy the company's stock at around $300 per share. According to companiesmarketcap.com, the company's market capitalization is below USD 169 billion at the end of October 2022, while it was USD 818 billion in the same period two years ago. 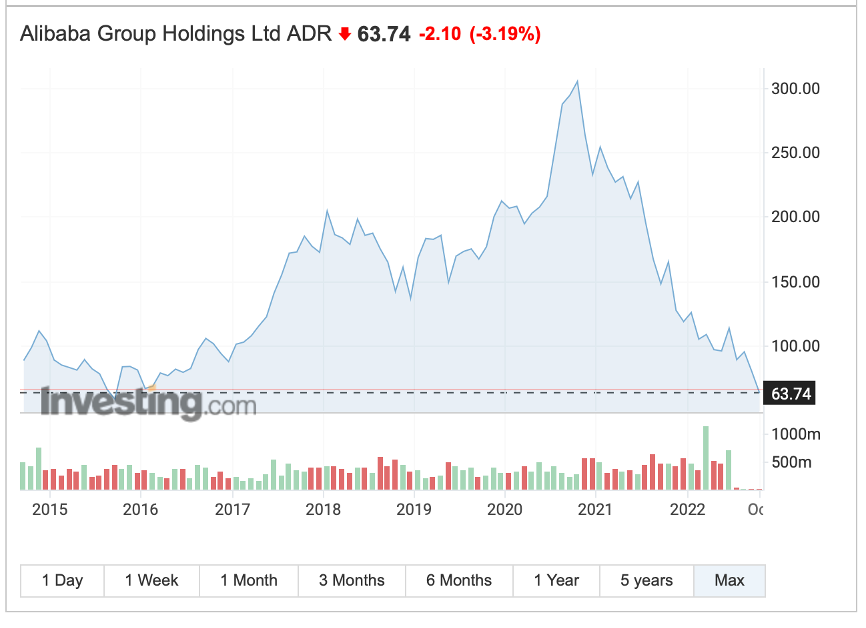 Graph: Historical development of the value of Alibaba on the NYSE. (Source: Investing.com)

The problems in the debt-laden property sector, where the situation is currently very tense due to the aforementioned slowdown in the economy, were not addressed at all at the congress. The situation is exacerbated by strained relations with the US, which are related to high technology. At the beginning of October, President Joe Biden announced new restrictions on semiconductor exports to China, including the introduction of new licences required for US firms to supply Chinese companies with equipment for the production of advanced chips. In fact, it can be said that the current dispute between the countries can also be called a 'technological cold war'.

Light at the end of the tunnel

Investors are aware that there are currently several risks associated with investing in Chinese companies. While we may be seeing a light at the end of the tunnel in recent days, overall, shares in Chinese companies have seen a sharp decline since their highs. Alibaba has lost about 75 percent of its market value in two years. Another warning sign is the fact that the political situation is not looking good, and as a result of relations with Russia, China is also weakening relations with Europe, even though it has already called on countries to end the war peacefully.

* Past performance is no guarantee of future results.