Investing in Green Bonds: What’s in it for the Investor?

Green, or climate bonds, have witnessed a surge of growth and popularity over the past 5 years. Issued by governments and business entities, green bonds constitute a market value of over $1 trillion as of 2021, proving to be an advantageous asset for entities & a lucrative buy for investors. What’s so special about green bonds, and will they keep propelling higher? Wonderinterest Trading has prepared a summary of opportunities in this area of investing.

This first green bond was issued by the European Investment Bank (EIB) on July 5th, 2007. Since then, more organizations have embarked on releasing green bonds to investors as they have proven for more than a decade to be an effective asset for entities and an attractive investment for investors. But what are green bonds to begin with?

Green bonds, also known as climate bonds, are a type of fixed-income debt issued by public or private institutions, designed to raise funds to finance themselves towards a climate or environmentally-related project. Green bonds typically focus on renewable energy, clean transportation, energy efficiency & waste management. For a green bond to be considered as green, it must follow the green bonds principles established by financial actors in the International Capital Market Association (ICMA), which are as follows;

The Rise of Green Bonds

The green bond market has grown exponentially, especially in the past five years. Today, the market is valued at over $1.2 trillion, with an average growth rate of almost 95% on an annual basis. The diagram below portrays the cumulative progression of the green bonds market over the years, provided by the World Bank-owned Climate Bonds. 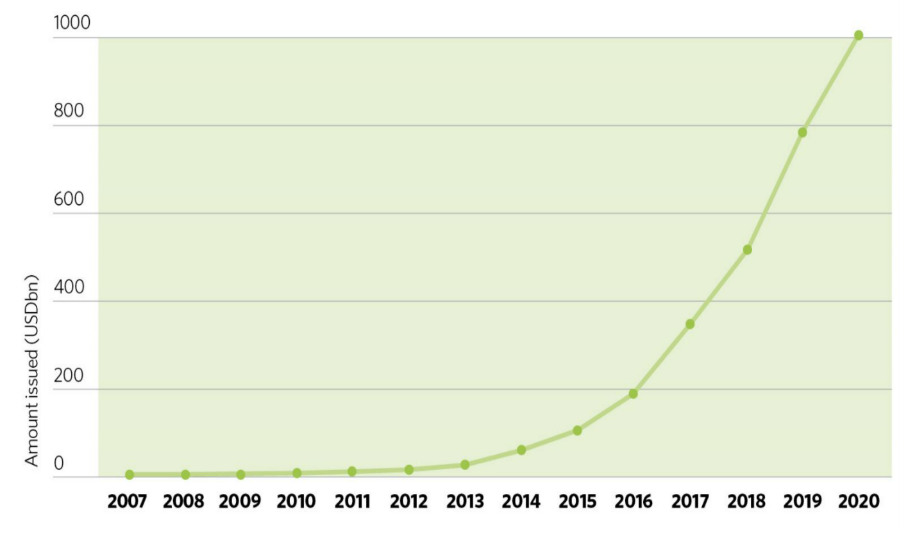 As seen, the surge started to propel in 2013 after the first $1 billion green bond issued by the International Finance Corporation (IFC) on March 13th of that year, which sold within an hour of issuance. It’s crystal clear how fast the climate bond market has been accelerating upwards. The question is, why are green bonds so attractive?

·         Project financing at lower capital cost – climate bonds are effective economic instruments, as they finance large amounts of capital in the name of supporting environmental initiatives with less capital than traditional bonds. This is because green bonds are well-suited for large sustainability projects such as minimizing CO2 emissions.

·         Achieves leadership and boosts brand value – green bonds issuers can be considered as leaders in building up this field, and such will boost their popularity, brand value and trust among individuals, business and nations.

·         Going green with no additional risk – bonds are typically less risky than equities or other forms of investment, as they guarantee a timely return on a specified date/period.  Going green with no additional risk just feels right to investors, as they are contributing towards a better future. Green bonds are often less risky than other types of bonds, as repayment is linked to the issuing company rather than project success/failure.

·         Green bonds are tax-free – other than the green aspect of climate bonds, they are typically exempt from taxes, which is one of the reasons why investors rank green bonds as one of the most attractive fixed-income investments.

The green bond market has been growing at an exponential rate, and is expected to grow even further in the following years. The United Kingdom issued their first green bond in summer of this year, with 16 countries following through. Just recently, the European Union issued and sold a record-sized and demanded bond, with sustainability proving to be a major focus of Wall Street today and in the near, foreseeable future.